How to Use 3 External Monitors with a 2018 Macbook Pro

Posted on August 5, 2020 by Daniel Renfro in Productivity

When I upgraded my Macbook Pro from a 2014 to a 2018 I obviously saw a pretty big performance boost. Things were faster, the fingerprint login was great, the keyboard was nice and it was thinner and lighter. But there were definitely some drawbacks, mostly the ports included on the 2018 models. Honestly, i do like USB C (Thunderbolt 3) as a general form factor…I just don’t like that Apple decided to give us 4 of them and send everyone off to buy dongles that mostly aren’t any good and seem to bust pretty quickly.

But the other impact of the change they made is that they took away the ability to use three external monitors.

I tried every combination that I could think of involving plugging in my monitors directly into the USB-C ports, getting new dongles that promised to be able to support two monitors from one plug, and a few other things as well. From Apple’s product description of the 2018 Macbook Pro:

I would often use three external monitors…the 17 inch display from the Macbook Pro itself is a bit small and I preferred to use a larger monitor as my third. In fact (and call me crazy) but I would also like to use four monitors sometimes…three external monitors and then using the Macbook’s screen itself as the fourth. I know that’s not everyone’s cup of tea but I at least liked having the option and this option was taken away from me without my knowing when I got the updated laptop. This is, admittedly, the definition of a first world problem but I wanted to figure out a solution.

DisplayLink: Not a Solution in 2020 for Macs

The first thing I tried was getting a portable USB monitor which essentially was powered completely through the USB port and connected through a technology called DisplayLink. This worked well for long enough (and still works for Windows computers and maybe some older macs) but eventually it became incompatible with the newer versions of macOS. I keep checking back in to see if I can get this working with my 2018 Macbook Pro but every six months I’m disappointed…it’s a recognized problem by the company and maybe some day they’ll fix it but I won’t be buying back into DisplayLink because I d0n’t like my product to be not supported for years after I buy it (even if it’s not their fault). There was always a little bit of lag on this display as well which often would bother me.

The Solution: Use a USB-C Portable Monitor 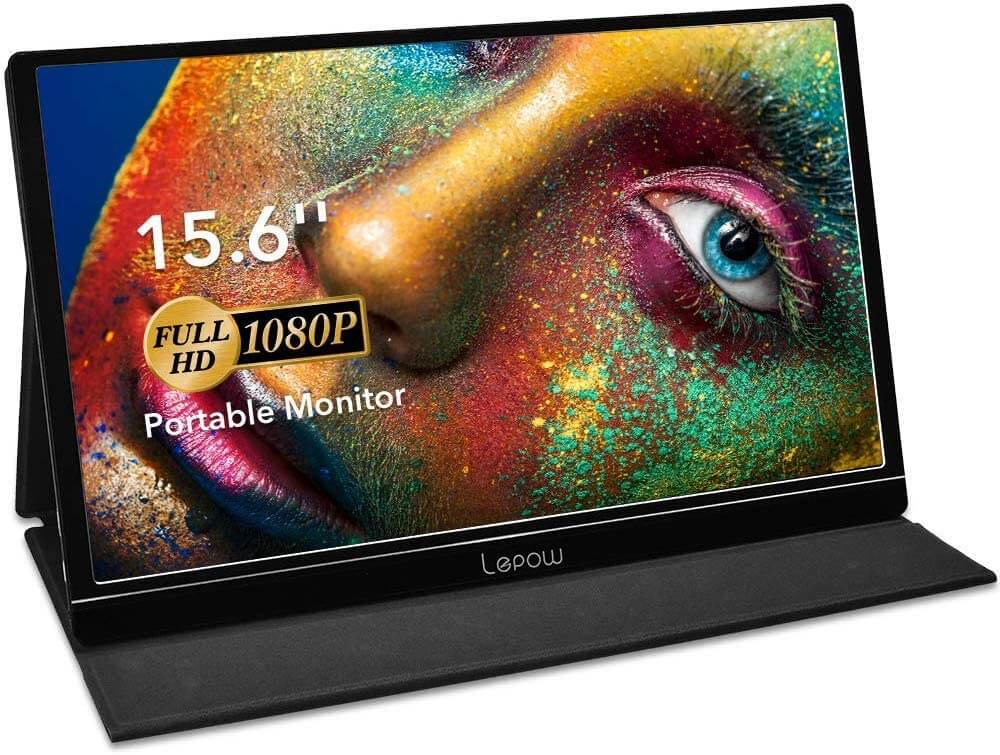 I have since figured out a solution which works very well for running three monitors with my MacBook Pro 2018. It’s not a normal monitor but it definitely has its perks.

Works as a 3rd external monitor for Macbook Pro 2018

I purchased the Lepow 15.6 Inch Computer Display which supports 1920×1080 resolution. This is different from the above DisplayLink solution because there’s no software required to drive something like this. The Lepow is just like a normal monitor in that it has a USB-C input and can receive a USB C straight from the Macbook Pro, eliminating the need for software drivers.

Powered through the USB-C cable

Even better – this monitor, being a portable monitor, gets all of its power through that one USB-C port, meaning you don’t need to run two cables to it. Now, you can if you want – there is a port on the other side which will keep it powered (and therefore not drain your laptop’s battery) but it stands to reason that if you’re adding this monitor to your desk setup your laptop will likely be plugged in, eliminating the drain this monitor will have on your battery.

You don’t have to use USB-C either, this screen also supports mini HDMI (the form factor is too thin to support regular HDMI).

Once you turn this screen up to 100% brightness you’ll be surprised that something this thin, light and powered only through the USB-C cable that is also providing the video data can create such a nice picture. I don’t use this screen for anything more graphically intense than random YouTube videos and watching sports so I can’t speak to its color profile. I likely wouldn’t recommend doing professional design work on it but besides that, it gets a really good rating from me.

One of the problem with the DisplayLink monitors is that it came with a good amount of lag. Fortunately, using the Lepow portable monitor it came with zero lag – it’s just as snappy as the other two monitors I use which means I can effectively sync what I’m seeing to what I’m hearing – obviously a plus for any type of TV, movie or sports watching.

Measuring in at only 0.3 inches thick and 1.75 pounds you’ll have no trouble

This monitor could be a little small for some people but for me, it’s a third external monitor and is what I use to answer emails, slack, music, and watch YouTube videos so it doesn’t need to be huge. Having this monitor which is designed to be portable and not need another power source is fantastic for when you’re on the road or just want to get out of the house. You can continue using a dual monitor setup even if you’re somewhere where it would be impossible to log around a big bulky normal monitor. If it is too small for you there are also very highly rated USB-C monitors that are over 17 inches.

Is It Perfect? Almost.

No, it’s not completely perfect. There are two issues with this product that I want to point out. These issues are really nitpicking…they shouldn’t stop anyone who’s serious about adding an extra monitor to their arsenal but they’re worth knowing up front.

The first issue is that when you turn put your computer to sleep (or unplug the monitor itself) the next time you plug in the Lepow monitor it will go back to 30% brightness. All this means is that to bring it back to 100% you’ll need to hold the brightness button on the right side of the screen to get it back to 100%. The other workaround for this is to actually plug in the monitor to a power source so that it doesn’t turn off completely between uses. A slight annoyance but really not a real problem.

The second issue is the case. It’s a nice magnetic case that doubles as a stand for the display. It works pretty well but if they perfected it I could see it being even more useful. The first problem with the case is that there are only two options to angle the monitor. One of the two angles works perfectly well for my needs to no harm, no foul. The second problem is that case can topple over sometimes. The magnetic part of it that attaches to be the back of the monitor can slip if you’re moving it around and the monitor can fall over. Again, a slight nuisance and not worth avoiding the monitor over but I figure I should at least mention it.

You might be wondering what the difference is between using this monitor and using the monitor attached to my MacBook Pro. The difference is that this monitor is very thin and can sit on my desk in a position where, if the laptop were sitting there, the keyboard would get in the way of all of the other items on my desk. It’s also worth pointing out that the issue has never been getting three total displays but rather getting three external displays. Now I can have four monitors if I need them if I include the display in the MacBook Pro in that count.